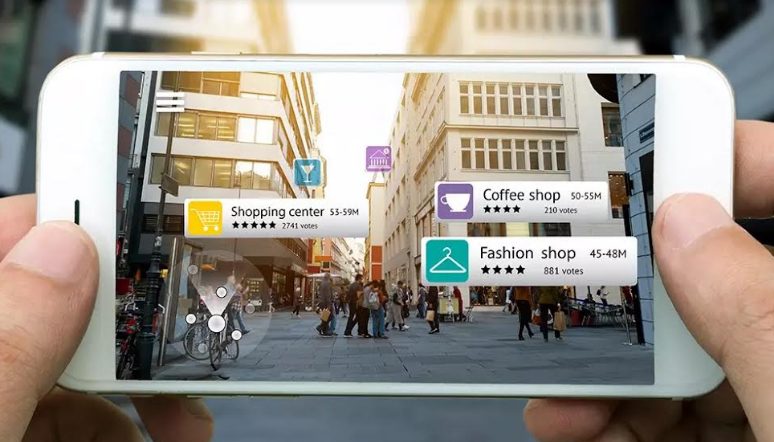 The augmented reality market is developing rapidly. Today, it has a total market value of almost $15 billion; according to Statista,  and this figure could rise to $210 billion by 2022.

Augmented reality is having a huge impact on the games industry, but it’s being used by organizations in fields as diverse as publishing and retail.. For example, Layar is an app that turns static objects into live objects, while IKEA’s Catalog app lets you imagine how different types of furniture might fit into your room. But it’s not just about commerce: some apps have a distinctly educational bent, like Field Trip. Field Trip uses augmented reality to help users learn about the history that immediately surrounds them. 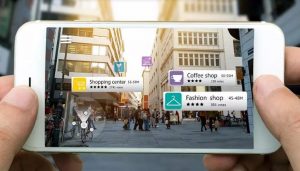 How does location-based AR app work?

Location-based augmented reality apps are sometimes called geo-based AR apps. Whatever you call them, one thing is important: they collate GPS mobile data and the digital compass to detect the location and position of the device.

The AR app arranges queries to be dispatched to the sensor.

Once the data has been acquired, the app can determine where it should add virtual information (such as images) should be added to the real world.

Location-based augmented reality apps can be used both inside or outside. When inside and it isn’t possible to connect to GPS, the application will use beacons for location data.

While reading about location-based augmented reality apps can give you a good idea of how they work, to be really inspired, you need to try some out for yourself.

Here’s a list of some of the best location-based augmented reality apps out there.

Yelp Monocle helps you navigate an unknown city. Using GPS, it provides exactly the sort of information you’d expect from Yelp, but in a format that’s fully integrated with your surroundings. So, you can see restaurant reviews, shop opening hours as you move around your environment.

Ingress is an augmented reality gaming app that immerses you in a (semi) virtual world. Your main mission is to find portals that the game ‘creates’ in your immediate environment and open them. Essentially, the game is a great way to explore the world around you and places a new augmented layer on a place that might otherwise be familiar.

Vortex Planetarium is an app for aspiring astronomers or anybody else with a passing interest in astronomy. The app detects the user’s location and then provides them with celestial data to better understand the night sky.

So, if you like the idea of a location-based augmented reality app, you’ll probably want to get started. As we’ve seen, these apps can be incredibly complex, but if you break the development process down, it should become much easier.

Depending on the complexity of your app, you need to determine what resources are needed – that could be anything from data to other frameworks and services will be required. For example, if you plan to create a game with 3D objects, you’ll need to use Unity to build in that level of functionality and realism.

There are a huge number of available augmented reality software development kits out there. However, rather than wade through every single one, here are some of the best to get started with. R SDKs, but we will list the most popular ones that can give you the widest range of possible features.

AR kit from Apple features just about everything you’d need to develop an augmented reality application, For example, it has a technology that allows combines both computer vision and camera data to track the user’s environment.

AR Kit also is able to adjust the light level in the virtual model, to respond to the level of light in the real world.

In Google’s ARCore you’ll find a mapping tool which is particularly useful for developing of location-based AR apps. ARCore can also track motion and detect vertical and horizontal surfaces.

In the latest version of ARCore users can take two gadgets and work with one AR object from different viewing angles.

Not all SDKs provide mapping feature. If it doesn’t, it’s essential to make sure you add in geolocation data. Without it, the app wouldn’t work! As we’ve already seen, GPS technology is typically used. It’s convenient and it can detect a user’s location anywhere. It can, however, consume a lot of energy. Location services on iOS and Android will help to activate geolocation on the device.

Developing something as complex as a location-based augmented reality app is bound to lead to some challenges. So be prepared – watch for some of these pitfalls..

Ensure you have proper functionality. When users move with their camera and look for AR objects, these objects should remain static, regardless of the user’s movements. To do this, use SLAM – Simultaneous Localization and Mapping. This is a technique that allows software systems – like robots – ‘understand’ where they are situated in relation to their surroundings.

Accuracy. A crucial factor for any AR app is accuracy. When developing your app, it’s essential to consider the user’s position to ensure that the app sends queries to sensors correctly. If it doesn’t the whole experience could seem plain weird for the user. Similarly, the distance between the device and the real world must be calculated correctly – again, if it isn’t your application simply will not work.